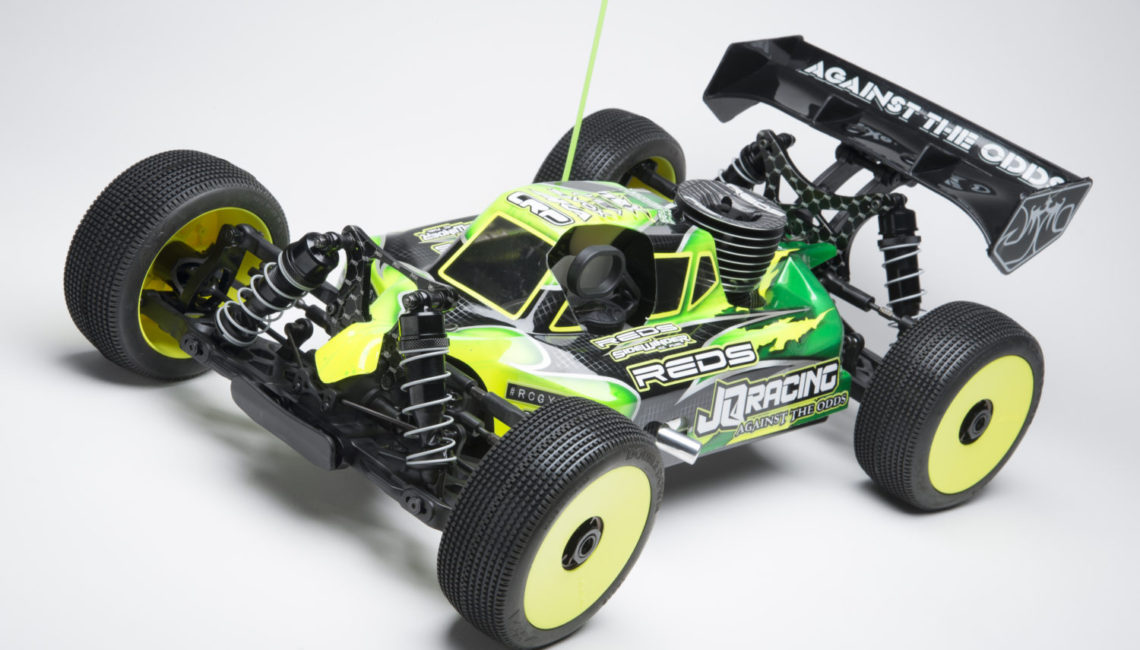 The White Edition was released at the end of 2013, and at the time I already knew that I would be able to develop it into an amazing car, I could tell it had potential. The thing was, that I needed more time to figure out the geometry, and a few other things with the design. At that time I decided that when I did figure it out, I would rename the car, because the improvements in handling would be significant, even though the overall appearance would not be. The LV was a step in the right direction, so we updated the White, and kept on developing the platform, which would ultimately result in the new Black Edition.

The focus was on three main areas of performance that I will describe for you:

Those were the main areas of focus, but of course a lot more has been improved. Let me explain.

As we all know, the fastest way around the track is on the gas. Rolling around off power isn’t the fastest way. This is why a lot of our focus was on improving the way the car handled on power. The idea was to make the transition from off power to on power as smooth as possible, and vice versa, so that when the driver gets on or off power, there would be a minimal change in the car’s attitude. Minimising weight transfer, as well as the change in steering feel, would make the driver feel more confident on track, as there would be no surprises.

Another point is the way the car tracks straight on power, not getting out of shape over bumps, or when individual tyres have different traction. The Black Edition is a lot better in these situations, and if you get on power, and stay on, the car will go where you want it to go, without changing course on it’s own, wether that is in a straight line, or round a corner.

Finally, staying upright is obviously key in racing, and with our offroad tracks, featuring off camber sections, bumps, and jumps, you need a car that can corner fast, and navigate all sections of the track, without flipping over. Along with the reduced roll and pitch of the car, and the smooth transition from off power to on power, and the way the car keeps it’s line either going straight, or it’s arc in a corner, it’s now possible to drive around the track with more power applied. The way the Black Edition is designed, the more throttle you apply, the less likely the car is to flip over, and in fact, if you get scared and let off, it is actually possible to crash because of that. Staying on power with the Black Edition in rough high speed corners actually keeps the car low and stuck to the track, and you can power yourself through any situation.

How Did We Achieve This?

All this has been achieved by a combination of things, the most important being the new diff height, the updated front end geometry, and the refined steering angles, compared to the LV.

The diff height, which has been developed to work together with the rest of the geometry of the car, helps the car stay low and flat on power, reducing roll and squatting, making it possible to apply more power. It also made the car carry more corner speed, so with the same input from the driver, the car would go through corners faster, and it was easier to string sections together. Basically a less talented driver is able to do what a talented driver does with precision and skill. When power is applied in a 4wd car like ours, there are forces at play that try to straighten out the 4 universal driveshafts. This causes a lot of friction and two important points that affect the car’s handling, the dogbone pin in the diff outdrive, and the universal joint at the wheel. The location of these matter, and by adjusting the diff location, we were able to improve on power handling and the ”invisible speed” of the car. More about that later.

Other important changes made to improve on power handling, are the new 18 degree caster blocks, that are used together with new steering knuckles with added King Pin Inclination (KPI), as well as new carbon fiber steering arms that reposition the steering link. The combination of more caster, the KPI, which changes the forces on the front tyres as well as the camber when wheels are steered, and the different ackermann thanks to the new steering knuckle arms, transforms the car’s steering and on power feel significantly.

The Black Edition has a distinctly different feel to any of our previous cars, largely thanks to the new steering geometry. THECar tracks straight when you want to go straight, and maintains it’s arc in corners that you choose, regardless of the track surface and traction.

To put it simply, where all the previous versions of the car were a bit nervous and aggressive as far as the steering is concerned, if you set the car up to have a lot of steering. This can be avoided with the Black Edition. The initial steering reaction is smooth, so off centre, and entering corners, the steering is smooth. Then as you slow down to navigate the corner, you will have more steering to do so, as the car rotates around, while still maintaining rear traction. Simply turn the wheel more to drive around the corner. The Black Edition corners with tracktion, instead of sliding around.

Exiting the corner, the car will naturally go into a slight push as you get on power, even if you keep the wheels at the same angle, as you finish off a smooth arc. The steering is there when you need it, but the feel is smooth and stable, and this is another reason for the Black Edition being easier to control on power. We also wanted to avoid large differences in steering feel, so on power, off power, high speed, low speed, the steering will always feel similar. You won’t be in a situation where you go from oversteer to understeer and vice versa. All transitions are smooth.

If I am completely honest with you, I don’t know all that there is to know about this topic, but I have figured out a few good details, but I’m not willing to share those with you. Basically it’s possible to have two car’s that feel very similar, but one will be faster than the other. Imagine a track with 10 corners, and one of the cars carrying more speed, resulting in 0.1 seconds faster corners, (that’s 1/10th, that’s ”nothing”). Add up all the corners, that’s 1 second a lap. So the same driver doing the exact same thing, will be one second faster with one car compared to the other, but they feel exactly the same. This is not to say that both cars can’t be as fast, they can be, the slower car just needs the driver to be better.

This ”invisible speed” mystery, is one area we made sure to keep in mind when working on the Black Edition. We didn’t want to make the car stable and slow, which means that the driver has to drive hard and perfect to be fast. We wanted the car to still be naturally fast, just like our very first car was, and instead just numb down the controls. We wanted the car to scrub as little speed as possible in corners, and drive within it’s limits as easily as possible, as well as lay down the power to the ground and accelerate as fast as possible. By numbing down the controls, the steering response, and the cars reactions to the track, but not removing it’s speed, it’s possible to develop a car that is fast when driven calmly and in complete control. That is a car that can be driven for a long time without mistakes, as it requires less effort from the driver.

The Black Edition comes equipped with a longer, thinner 3mm chassis. The longer chassis, with a more forward weight bias improved the handling in bumps and interestingly through corners too. The thinner chassis just makes the car more forgiving, specially on difficult inconsistent tracks. The rear brace is now long, and machined out of aluminium. The longer brake stops the thinner chassis from flexing too much.

Because we raised the diffs by inserting a carbon plate between the gearbox and the chassis, we had to make new towers and arm holders, in order to maintain the same geometry, and for the net effect to be a higher diff. The arm holders essentially produce identical geometry to the WE LV. However the towers are different. It is now possible to stand the shocks up more than before. Also the front link now has one lower hole.

As you can see, we also have a new body, a more modern and universally liked design. A beautiful car is faster! We designed and produced the body in collaboration with Bittydesign, the excellent Italian company, who also arrange Bittydesign Contest races around the world.

We have also worked on improving the durability of the car. The most notable updates being the inner hinge pins, which are now harder, and a lot less likely to bend in a crash. The hex pins on the other hand are softer so they don’t snap under high stress anymore. We also improved the threads on the shock caps and shock bodies, in order to make the fitment more secure. The updated Ackermann plate features larger diameter bushings that last longer and provide a more secure assembly. Finally, we now have a replaceable steel skid plate recessed into the chassis, which lengthens the life of the chassis, as long as you keep replacing the skid plate.

The Black Edition is a very very good car straight out of the box. Believe me. It is tremendous. Very very good. We are in no hurry to release a new one, but we will of course be developing it further. We are a racing company, and we will never stop working! The focus will be on widening the window of greatness. We want you to be comfortable on any track in any condition with only minor changes to the setup. Making the window that the car works well in wider, will make this possible. This can mainly be done by working on the setup using the options already available on the stock car.

The basic setup should be good everywhere, and if you follow the guidelines in the manual, and on our website, you will see that it’s easy and simple to dial the car in to any track.

The new parts you can expect in the future have to do with reducing weight, so various weight saving options, different caster angles, different pistons, springs, and different steering geometry as we improve on it. And in another few years, when the improvements are significant, we will once again release a new car. But for now, and the coming years, BLACK Edition is where it’s at! 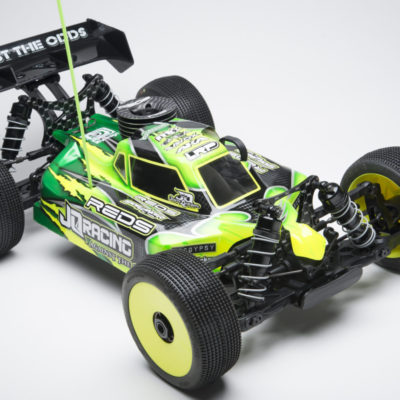 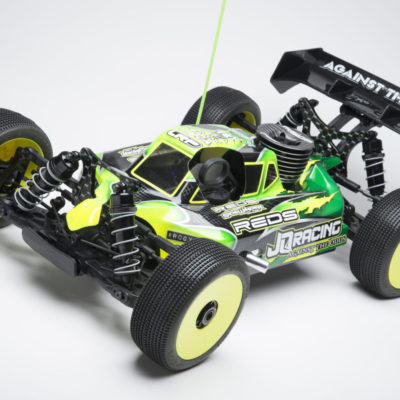 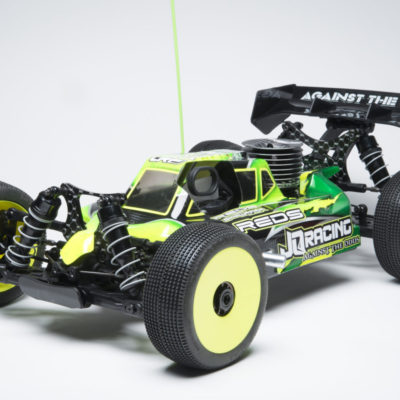 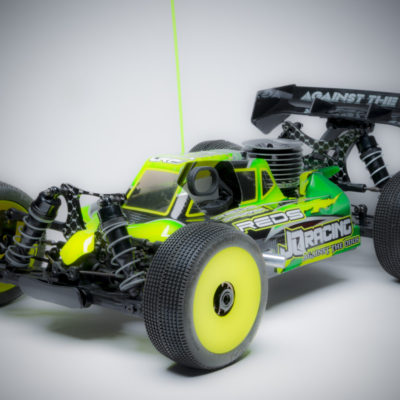 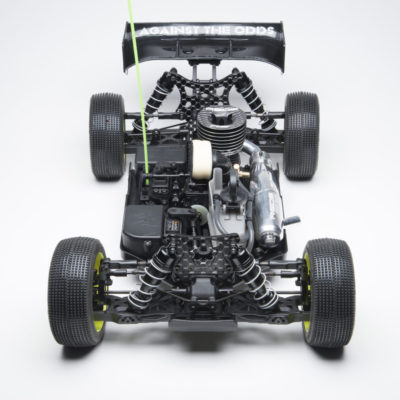 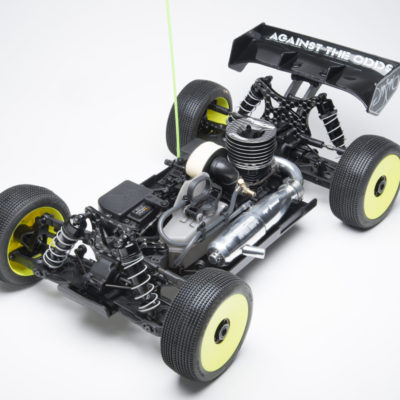 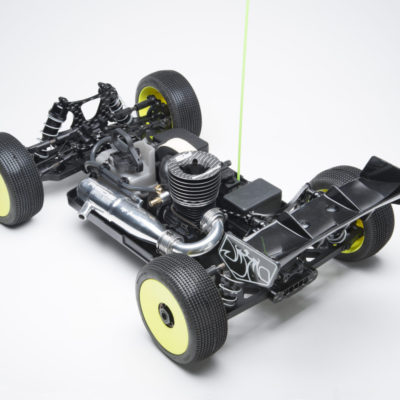 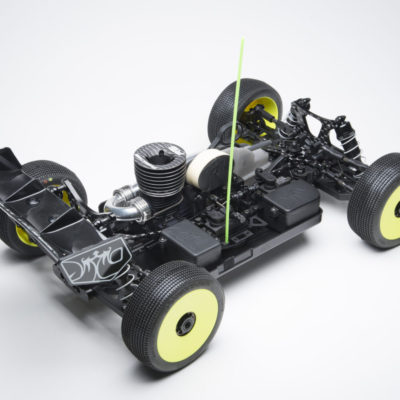 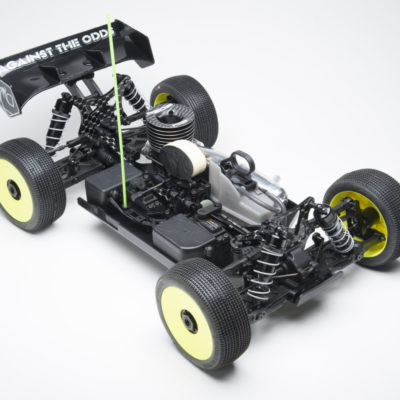 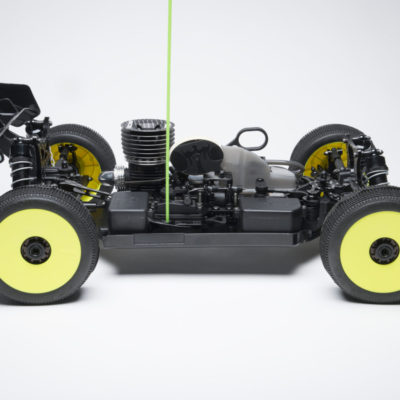 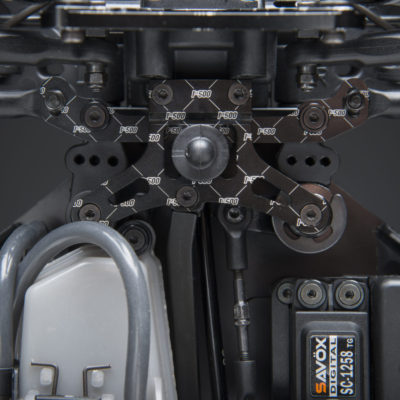 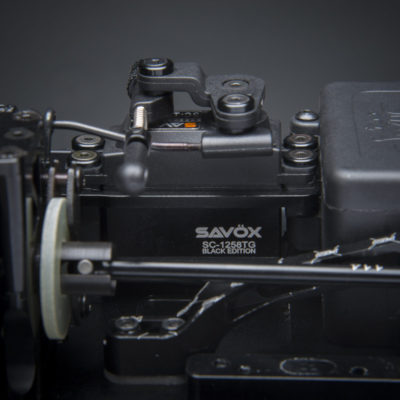 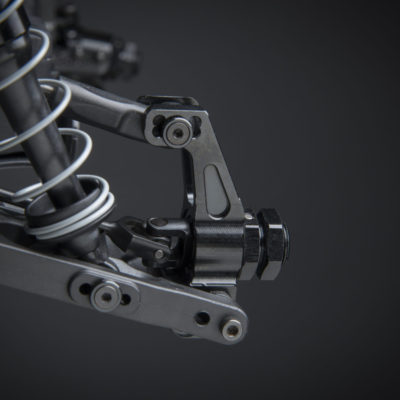 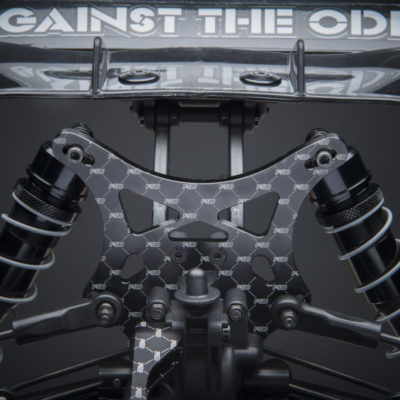 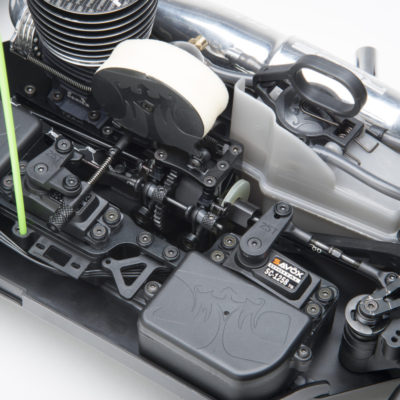 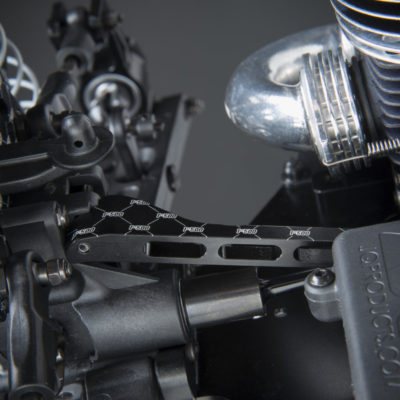 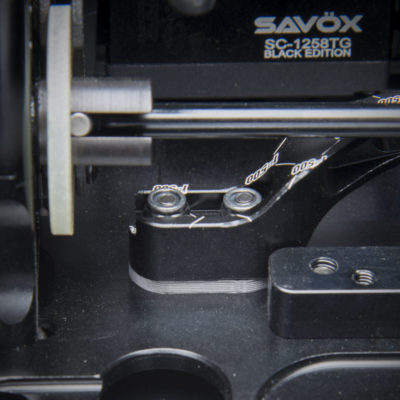 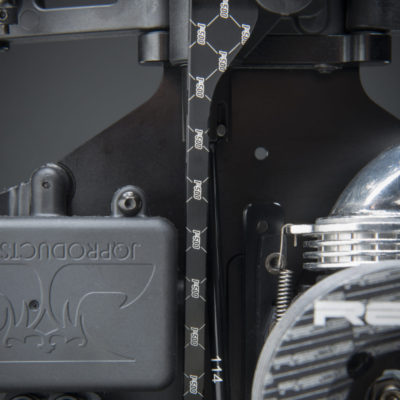 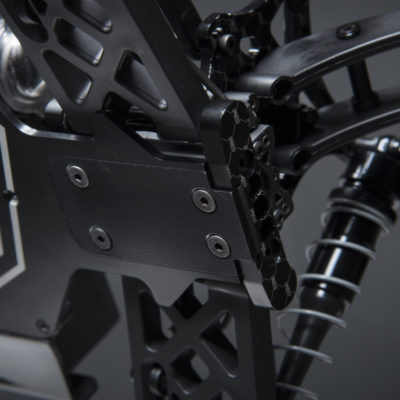 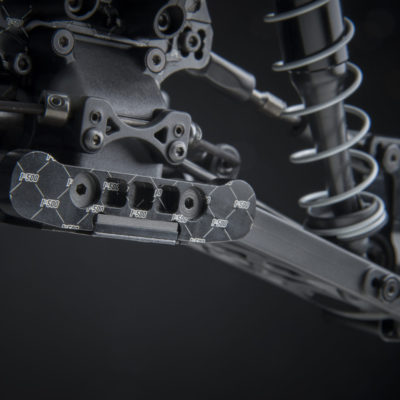 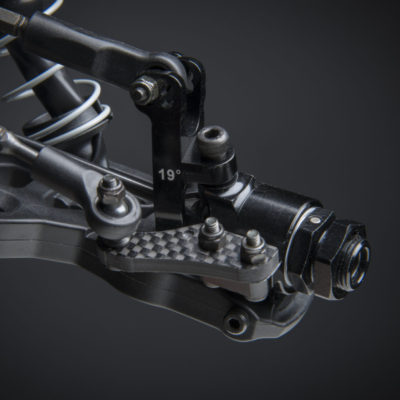 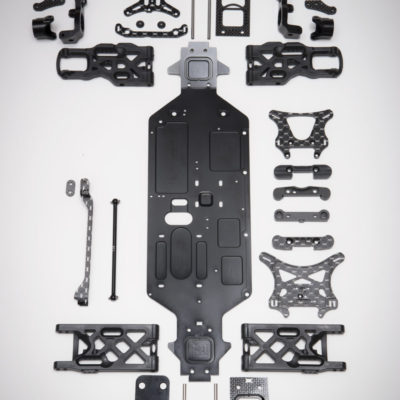 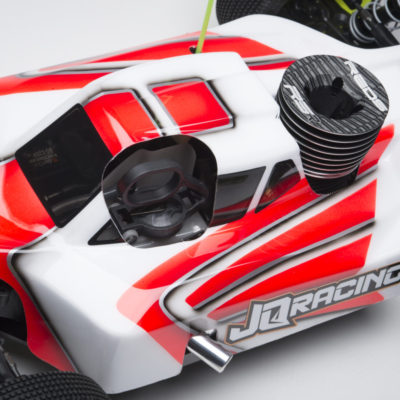 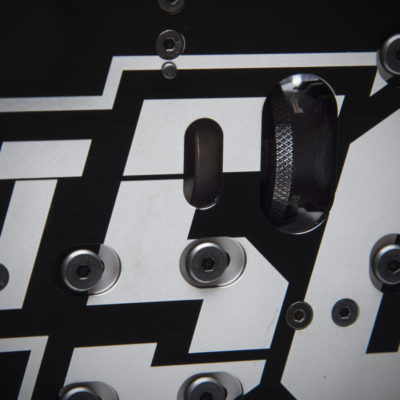 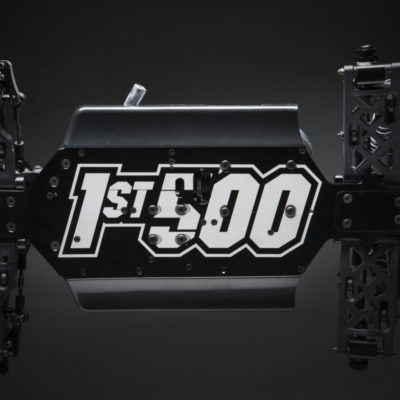 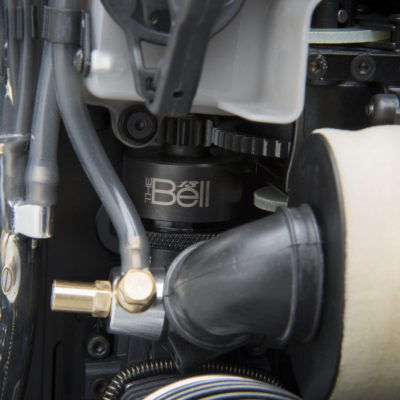 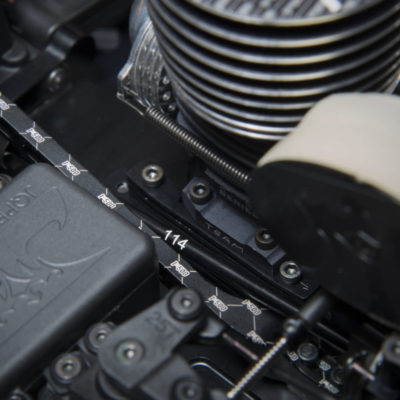