The kit set up is a good base to start from, except the springs should be medium all round. Other good setups are, JQ Kauhava (more aggressive), and Chris Marrale (more stable), setups. They can be found here.

While testing the Yellow Edition, I spent a few months in USA. My goal for the trip was to find a new base setup. I needed to find some more speed, and make the car easier to drive. I had wanted to find some pistons that worked with stood up rear shocks, as I felt the car could be pushed more with the shocks stood up, but previously it had always been terrible in bumps this way.

With the changes to the car, and fine tuning the setup, I was able to make THECar easier to drive fast, and I started doing better at races. It is clearly better than last year, but still, not perfect. But here are some notes about setup, and how I like to run my Yellow Edition.

With all the improvements on THECar, it now had enough traction for us to start running the rear shocks stood up. Definitely faster!

With the first car, I ended up running 7-5-3. It felt the smoothest just about everywhere. With the yellow edition, and the now stock smooth gearing, I have found 5-5-3 to be the best setting. I now use this everywhere. I also always use the front overdrive gear, 41/13, I just like how it makes the car work on and off power. I feel it holds the line better in corners. Some drivers have also had good success running even thinner oils, such as 3-3-grease, and they have liked it. Overall, since the 1st car, it seems that now thinner diff settings are favoured. As I said 5-5-3 is a great starting point. 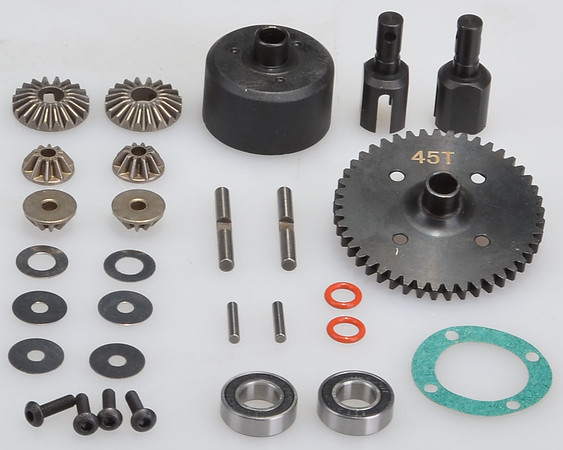 We have spent a lot of time testing shocks, shock positions, pistons and springs. We have been able to make the traction more consistent, so the rear end doesnt break loose, and it now handles the rough stuff better, and it can be pushed harder, and the suspension still handles it well.

On the front, I always end up running top middle on the tower, and inside on the arm. I mainly use the JQB272 multi size hole piston, flat side own, or the JQB285 4×1.2 and 6×1.0mm piston, flat side down. These seem to work well. 272 has more pack than 285, it is more responsive, and jumps and lands better. I like using the soft or medium springs up front. Soft on loose tracks, and medium on high bite. On the rear I use medium springs most of the time, on loose tracks, soft springs may offer more traction. Originally I always used medium and hard springs, but the production springs ended up being stiffer than the samples we had, so I now use soft and medium springs, and rarely, in very high grip tracks with jumps, do I run the hard springs. One point worth mentioning is, that some people find it difficult setting the correct rideheight on the rear because the springs are so long. In fact, in some shock and rear hub location combinations, it is in fact impossible to set a low enough rideheight. If you are dead set on running a combination like that, it is worthwhile getting an extra set of front springs and running them on the rear. As for me, I always run the rear hub hingepin in the lower hole on the hub, and middle on the arm, and the shock in the outer hole on the arm. This way, I can even set the rideheight too low. Enough room to manouver around. The springs were designed for a setup similar to this.

With the first version of THECar we always ran the rear shocks 1 out from inside on the tower, and middle on the arm. This was good up to a point. Driving smoothly it offered good traction, but when pushing the car hard, or when the car had to react to a quick change in direction, turning, or landing a jump, it would get unsettled. So we needed to find a way to move the point at which the rear end gets unstable further, to higher speeds. We did this by starting to run the shocks in the outer lower hole on the tower, and outer hole on the arm.

There are three different pistons I like to use. My favourite one for most tracks, is the 285 front and rear. Typically I use the same pistons front and back, except when I use the 10×1.1mm pistons, I only ever use them on the rear. The 285 pistons work really well on rough tracks, they can be loose, or high traction, the piston works great. The only time they dont work so good, is when there are many big jumps after each other. The car will bottom out, and jumping the next jump will be difficult. In these situations I change to the 272 piston. For example Thunder Alley, or any Joey layouts are tracks where the 272 is better than the 285 for this reason. Most European tracks, the 285 is the piston of choice. The 10×1.1 has been left out a bit, and honestly I need to start testing it more. But it has the least pack of all, so probably it would work better, in loose rough conditions. Here is something I wrote about the piston before:

”Robert Gustafsson from Sweden told me he had been running 10 hole 1.1mm pistons with much success. I tried these, but they didnt have enough pack, the car was bottoming out a lot. So I stood the shocks up all the way on the rear tower, and later also moved them out on the rear arms. I ran 500 oil, and my new hard springs, which will be released soon. In the front i ran my normal pistons. This made it possible for me to drive a lot more aggressively. I was able to get away with stiuations where before i would have crashed, spun out, or something similar. Now i just punched it more and kept going in the right direction. something definitely worth trying! ”

I always run the pistons flat side down. The reason for this is that it slows the rebound down, making the car less repsonsive, and slowing down the reactions of the car when it rides over bumps, jumps, or when cornering. It also makes it stay on the ground over rollers, and jump less. This means that you can hit a jump faster, and still land it. Think of it as a way to scrub a jump with yor setup. You can hit the jump faster, and not jump as far.

As for oils, compared to the first car, we have changed to running thinner oils. The car now clearly feels soft on the pit table. On the track, it handles the rough sections better, and still stays stable in fast sections. One of the reasons for this is explained in the following section, swaybars. 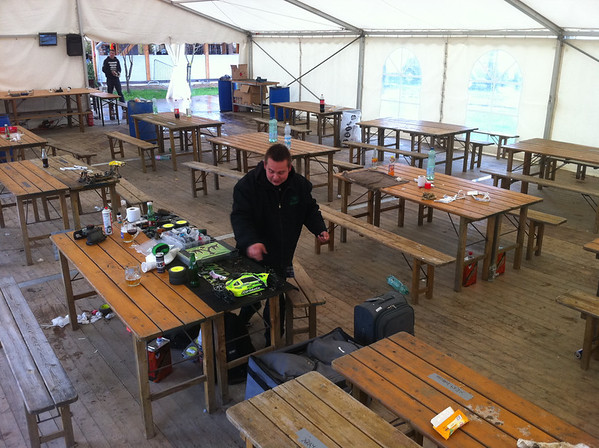 Arto is in charge of testing shocks, that’s why he is always the last guy in the pits. So much to test, so little time…..or not, he is just slow.

Running softer oils has been a good change, the car is smoother all round. To keep it stable at higher speeds, and on higher traction, we have started running thicker swaybars than before. Now the thinnest I go on swaybars is 2.5 front and rear. I run 2.5 or 2.6 on the front, and 2.5-2.8 on the rear, depending on the track. The smoother, more traction, or faster the track, the thicker I go, the looser, the bumpier the track is, the thinner I go, within that range. The thicker swaybars make it possible to drive more aggressively, and push the car harder in corners. The thicker swaybars, and softer suspension, along with stood up rear shocks, has automatically made the car faster, with the same driver input. The car maintains speed better.

If you want more rear traction, one good way to get it, is to flip the rear toe in plate upside down, and put the nr1 insert hole down, in the antisquat plate. This makes the rear of the car seem soft and make it roll more, and what you will feel, is more traction. If you feel like the change gave you more traction, but the car feels unstable because of it, try going up 0.1 or 0.2 on the rear swaybar, and try shortening the rear link to the middle row on the tower. The result can be a car with more rear traction than before, yet it also has steering and cornerspeed like before. 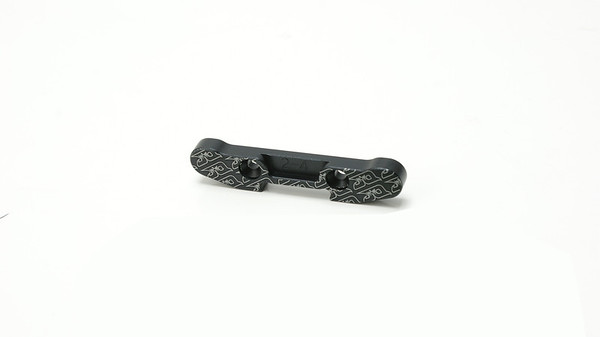 Flip this piece upside down, and use the nr insert in the antisquat plate, hole down for more rear bite.

On the rear, I change the link around quite a lot. I always run it high, I find it to be the roundest in corners. Some people like running the link low, which they feel gives the car more traction. I think it does too, but only to a point, after which it becomes unstable. So I run the link high, either long, or middle top row on the hub. Recently mainly in the middle row, for better steering. On the inside, I mostly run it in the inside row, one down from all the way up. If I flip the rear toe plate upside down, or I want the car to square up better after corners, I move it to the middle row on the tower.

That’s it for now!