THECar is now about 1 and a half years old, and it is time for a serious update. Already during the first year, we updated a lot of parts, including the plastics and the hingepins. All these changes were due to problems with durability. We do not think it is acceptable that THECar breaks in what can be considered normal crashes, so we acted fast, improving the strength of THECar.

The next step, was to improve the handling. During the end of last year, we tested a lot of ideas, and we were able to improve the handling enough, that we felt that we have to release a new car, the Yellow Edition. From now on every new car will be accompanied with a colour. This is because THECar, will always be THECar. But for clarity’s sake, for example when ordering spare parts, it is good to have some way of differentiating between different versions.

As for the changes, they have mostly been made in an effort to make THECar both faster, and easier to drive. Over the next couple of weeks we will release information about the changes, and why we did them. For now, just check out these first pictures:

NEW narrower, symmetrical and more flexible chassis. For more traction, and better when landing jumps, or driving over bumps.

NEW Improved smoother shocks, with soft bladders and CNC shock caps. These improve every aspect of the handling. THECar is easier to drive. 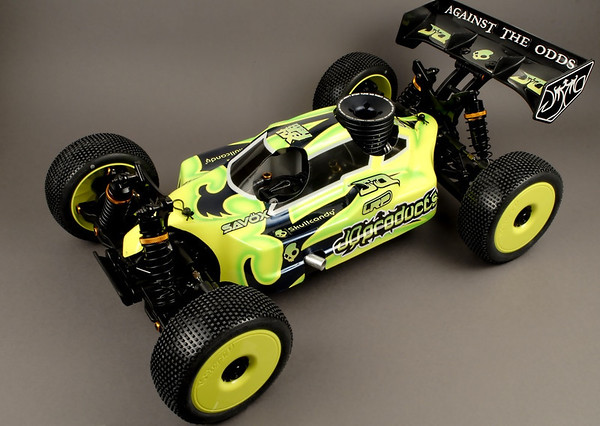 The new chassis is almost symmetrical left to right, where the old one was wider on the radiotray side. The width is now the same left to right, there is just a slight difference where the rear radiotray screw is located. Everything on the chassis, is still placed the same, the sideguards are just new, and equal width. So the chassis itself is narrower, but the overall width with sideguards is the same as before.

Old chassis on left, new on right. In the top pic you can see the new chassis on top of the old one.

The main reason for making a new chassis was the front of the chassis, which would dig into the ground. The new chassis has a lot more clearance at the front, and makes the car maintain traction better when landing off jumps, and driving through bumps. Also, the sides are not angled up, which makes the chassis slightly more flexible. Finally, since it is narrower, it is also 37g lighter than the old chassis, which is almost like a nice bonus.

Old chassis on left, new on right, the new one clearly having better ground clearance.

The shocks are the single biggest improvement on THECar. If you don’t get the new Yellow Edition, which is what we would suggest you do, if you own the old car, at least get the new shocks! Yes, they will be worth it. We improved them in a number of ways.

The shock bodies on the first car were rough, the first batch had some shock bodies that were machined badly, but even after fixing the production issues, they still weren’t smooth enough. It turned out, that the threads were deforming the body. The wall thickness was too small, in relation to the thread. We decided to approach this problem from two directions, by reducing the size of the threads, and making the shock body a bit thicker where the threads are. This means that we also had to change the rideheight nut, so the threads would work. After these changes, the shocks were silky smooth.

Old shock body on the left, new on the right. Inside diameter is still the same, just improved quality, for easier build, and better performance

Next on the list was the problem of assembling the shocks. Sometimes it was hard to build the shock without having airbubbles left in the oil. It turned out that the threads for the cap were too big. There was too much air being caught in the threads. With the smaller threads, it seems like as you close the cap, the oil fills the threads, and no air is caught in the threads, to spoil the assembly. We also machined a ridge on the shock body, that stops the cap from being overtightened, which was a problem on the original shocks. Drivers would overighten the caps, which caused the bladder to pop into the shock body. These changes make it a lot easier to build a smooth shock, without airbubbles, and also make it impossible to overtighten the cap.

After these changes, we also decided to include the improved soft shock bladder as standard, along with the CNC shock cap. The bladder makes the shock action smoother, and I feel it makes THECar smoother, with more consistent traction and bump handling. We discontinued the old bladder because the new soft one was so much better. The CNC shock cap is just included, because it is stronger, and improves the durability of THECar, out of the box. 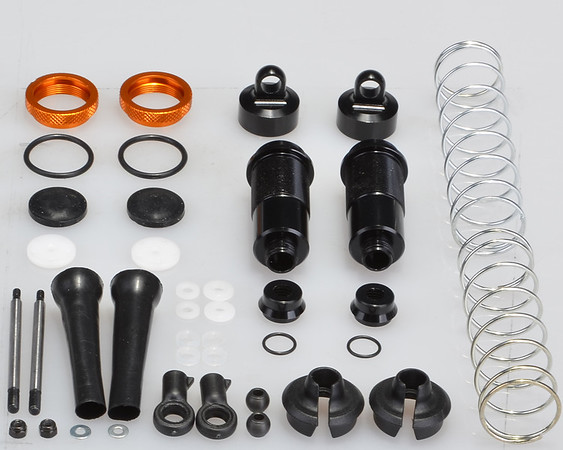 Finally, we addressed the springs. We tested all different springs we could get our hands on, and just like we did when originally producing the car, we found that a thinner wire diameter works the best, thin enough to be responsive and sensitive to suspension movement, yet thick enough to be hard enough, and keep its ”springyness”. We ended up making three springs, soft (Silver) medium (White) and hard (Black). Right now it seems that the preferred setup is medium all round, or soft front, medium rear. We will see how this changes as more drivers start running the new springs.

The stock 3 shoe clutch was redesigned. I always felt that it didnt work as it should, and engaged too quickly. The shoes are now new, everything else remains the same. Now the clutch engages smoothly, and can be tuned with the 0.9, 1.0, and 1.1 springs to suit your needs. I now use it myself too, when I was using all different styles of 4 shoe clutches last year, including my own prototype, which will hopefully see the light of day in 2012. But for now, the stock 3 shoe clutch is the way to go, give it a try! I like running 1.1 springs on it.

Old shoe on the left, new on the right, dialed now!

The fueltank was one of the things on THECar that caused problems for some people. Some people came up with modifications for the cap to make it seal better, others exchanged it for a Losi tank, which fit in, with minor modifications. I just ran it as it was, but made sure to loosen the seal screw a bit, and put collets on the ends of the spring to make it stiffer. It worked for me, however it wasn’t perfect.

For the new tank, we fitted an o-ring in the cap, to act as a seal. This works better, because now the tank doesn’t reply on spring pressure for sealing, and the seal is better. Also, we were able to raise the neck of the tank, which makes it easier to fill the tank without overfilling, and getting fuel everywhere. We also raised the pressure nipple location, in an effort to achieve more consistent pressure in the tank.

We also made the new tank 2ccs larger than the older, so it is closer to the maximum allowed limit. The old tank was too small. Finally, we made the new tank clearer, so it is possible to see the level of fuel easily through it, for when you want to quickly check the fuel level after a run.

In order to add value to the new Yellow Edition kit, we decided to include 2 sets of springs, medium and hard, and also 2 sets of front, and rear swaybars, so drivers can start tuning THECar to suit the conditions better, without having to buy option parts immediately. We also decided to include the smooth gearing as standard, and make the old gearing, which is still the preferred gearing on for example astroturf, an option part. The gearing makes the car easier to drive, as the initial acceleration is smoother.

The overall quality of THECar is also better, as the production of many parts has been fine tuned in order to create an overall better product. We have already received good feedback from customers, and team drivers, who have noticed a clear difference in the quality of THECar. We are really happy about that! Next time I will write about setting up THE Yellow Edition, and the improved handling compared to its predecessor.