James Vanhook for the win at The Force Series. James was able to take the win in the Intermediate Nitro Buggy A-main finals. Here’s James’ race report for the event:
“Well my racing for 2018 has come to an end and I couldn’t be happier with the results from my final race of the year. Bringing home the win in the Intermediate Nitro Buggy A-main at the final round of the Force Series at my home track. I want to first say thank you to those that have supported me this past year, BK Servo and Beach Hobbies. Also thank you for the help with the setup help Keenan K White and Rob Lupo with my JQ Black Edition. I couldn’t have asked for a better car in the main that was easy to drive, keep mistakes to a minimum, and super fast. Thanks Will Alderman for the pit help. And lastly thank you to Patrick Rossiter Jr., Cramer Giddens, Austin Michael Snyder, Christopher Fail, Choke-chai Sookkasem Shawn Flanagan and the rest of the guys that pulled together to make the race happen. You guys took a mess of a track and made it awesome. The determination and persistence to make this race happen was incredible.Now let’s bring on 2019!”

Zak Vrba talks about his race at Force Series at Phil Hurd this weekend.
“Phil Hurd round of the force series all wrapped up. I wish I could say I did awesome, but I didn’t lol. I qualified 5th in the Ebuggy A and finished 8th overall I think. A1 I finished 8th after getting caught in every first lap tangle up possible and in A2 I was running in 5th or 6th with less than 30 seconds left and had a motor solder joint randomly come undone. My Tekin powered JQ Grey Edition was on rails with super soft AKA Impacts. Like always thanks to Keenan K White and Darrin Wilson for the support and JQ Products AKA Products Inc. and Vendetta Hobbies. #jqtakeover #AKAracin #teamvendetta thanks to Patrick Rossiter Jr. and Austin Michael Snyder for the hard work on the rain saturated track starting at like 6am!”

Mike Walker & Trent Walker putting in work!
“Had a good time club racing at East Orange County R/C Raceway former Bithlo R/C Racewy and Crawler Track!! I was able to TQ both nitro buggy and electric buggy but after problems with traffic and rough first couple laps I would finish second in ebuggy and in nitro I chose the wrong tires and also broke my from arm with 5 minutes to go but I was still able to hold on to 3rd. I had a good battle with Tj Bradley going and I’ll be ready for the next one 👊👊” – Trent Walker

JQ Racing India send in this report from thier race this weekend !!
“I am glad to inform that Aravind and Jothish (sponsored by Veels on 5er Hobbies) running JQRacing Black Edition with REDS Racing R5R Racer Engine with 2104 Pipe and Sweep Racing tires took the 3rd position in IIT Mumbai Full Throttle National RC Championship this weekend. There were a total of 35 participants. They were on 2nd position from the beginning of the 30 min race and were chasing the 1st position guy very closely. They also took 1st position a couple times. As the clock had only about last 5 minutes left, in one crash the right rear shock popped out completely. Jothish somehow bought the car back to the pits and Aravind quickly put a zip tie to hold the shock.
Unfortunately the zip tie snapped in the first jump itself. At this point Jothish thought the race for him is done and he should get the car back in to the pits and call it a day. However Aravind had something different going on in his mind. He looked at the race timing on the screen and saw Jothish was still on 2nd position and the 3rd position car was almost a lap behind so he made a call asking Jothish to continue the race and complete the race. Jothish was confused at this point and repeatedly re confirmed if what he heard was right or not that he should continue the race. When Aravind reconfirmed multiple times that Jothish should command finish the race, Jothish now felt it would be hard to complete the race as the car was just undriveable. But once he got a bit of control on he car with a popped out shock, he then started pushing the car again and somehow completed the last 5 minutes and also managed to acquire the 3rd position in this National Championship.”

Adam Fikri was able to get a podium finish at the 2018 Pahlawan RC Challenge.
“That’s the end of the 2018 RC Racing. Unlike day 1 and racing in muddy track, In day 2 superb condition, A-Main Pro Class, with one upside down flame-out just before refuel and a bent rear upper link mid race where jumps is impossible till end of race, Adam drove well to salvage the day for a P3 podium. We are happy.
So we close off the year with lots of successes, smiles and memories and a lot of learning experience. We will come back stronger in 2019.” 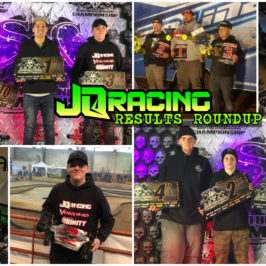 RUN FOR THE RICHES SERIES Zac Karr tq’s and wins ebuggy at first round... 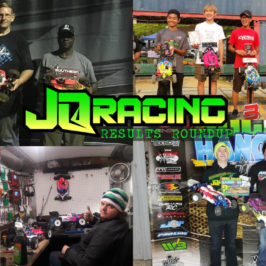